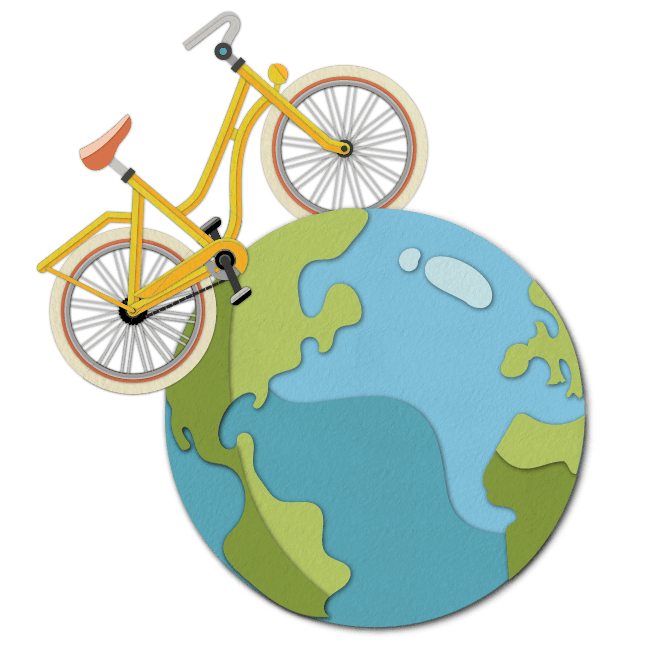 Spending hours stuck in traffic on the daily commute.  The never ending stop-start and engines sat idling.  Ever-increasing amounts of smog in the air. Why are these experiences so common? Because when many of the roads we use today were built, they were never intended to accommodate as many cars as they do today.  However, it isn’t only our roads that are struggling; it isn’t only us this affects.  Our planet itself was simply never intended to contain this many vehicles.  The effects have been accumulating for a long time, contributing to climate change and polluting the air we breathe.

So, what’s the answer? As well as looking to the future for new, innovative ways of fighting climate change, perhaps it’s time we also looked back to just before cars became common – back to the time of cycling.

Diesel & petrol: not so good

Vehicles powered by fossil fuels, including HGVs, cars and motorcycles, contribute to global warming. Their continued use undermines the fight against climate change.  This is because when these fuels burn, they releases carbon dioxide (CO2) into the atmosphere, which makes our planet warmer over time.  According to Environmental Protection UK, “Road Transport accounts for 22% of the UK’s total carbon dioxide (CO2).”

This makes it the country’s single biggest contributor to climate-wrecking emissions.

It’s worth repeating something we mentioned in a past blog on the ‘Just Transition’: the science suggests that unless we keep global warming at least 2 degrees Celsius below pre-industrial levels, we will face an environmental catastrophe on an unprecedented scale. At the current rate, we’re heading for closer to 3 degrees Celsius.

Cycling is better for our health, our finances, increases the amount of free space around us, and it can even save us time compared with being stuck in peak-time traffic jams.  It’s also a great way of fighting climate change.

Bicycles do produce some carbon dioxide. First, CO2 is used to make them. Second, they are powered by us, and we are powered by food, and the production of that food produces carbon dioxide.  However, bicycles produce approximately one-tenth the amount of carbon dioxide as petrol-fuelled vehicles, so the environmental impact in comparison with cars is negligible and far outweighed by the benefits mentioned above.

To put this into perspective, if people in England cycled as often as those in the Netherlands, there would be around two million fewer car drivers in England. This would reduce CO2 outputs by over 1,500 tonnes a year on average.

E-Bikes: also better, but not perfect

Electric bikes, or E-bikes, are becoming increasingly popular across Europe, as are E-scooters. This is a good thing, because they also use considerably less energy than petrol-fuelled vehicles. An E-bike comes with a rechargeable battery that you attach to it.  This provides the option of assisted pedalling to ease the strain on your joints or give you a boost going up steep hills.

Despite using less energy, E-bikes are not a completely sustainable solution yet because they use lithium batteries. The lithium is usually mined from salt flats in North and South America. It is extracted through a drilling process which uses huge quantities of water and pollutes local water supplies with toxic chemicals, which affects local communities, ecosystems and food production. It also harms the soil and causes air contamination. Moreover, only 5% of lithium batteries on the market are recycled – most are either incinerated or end up in landfill. So, whilst E-Bikes are generally a greener alternative to petrol-fuelled vehicles, they are not a perfect solution and we will need to be careful with them going forward to avoid creating new problems.

By breaking our habit of over-reliance on our cars, the pandemic has given us an opportunity to speed up the process of making greener, healthier methods of transport the norm. During lockdown, people avoided using their vehicles for unnecessary journeys and walked or cycled as part of their daily exercise. The challenge is to solidify these habits going forward by building cleaner and better transport infrastructure.

In the U.K, cycling can be a stressful and even dangerous experience.  In order to make cyclists feel safe on the roads, we need to make some important changes to our transport infrastructure, including but not limited to:

This is already happening, to some degree. In May 2020, the Department of Transport created a £250 million emergency active travel fund for local councils to encourage greater walking and cycling after the original lockdown restrictions were lifted. This was part of a £2 billion investment in walking and cycling, and included pop-up bike lanes with protected space for cycling, wider pavements and safer junctions.

However, this £2 billion pales in insignificance compared to the £27.4 billion of investment the UK government made available to repair, replace and expand the existing road network just a few months later in August 2020. Taken together, what do these figures suggest about the government’s underlying priorities? Do they really want to create greener transport infrastructure, or do they simply wish to keep those in favour of it quiet, whilst they push ahead with their agenda to (quite literally) cement the status quo?

Furthermore, some of the aforementioned measures have already encountered opposition for their poor location and design. For example, Transport Secretary Grant Schapps has criticised the Low Traffic Neighbourhoods scheme led by Mayor of London Sadiq Khan, claiming it has increased traffic congestion in London at peak times. This is a reminder that it is not solely a matter of funding, but also about proper planning and preparation if we are to make schemes like this a success.

Other parts of the solution

Obviously, cycling is only part of the solution to climate change. There are various other steps the government could take to create greener transport infrastructure, including:

To sum it up, our individual efforts to cycle more won’t be enough to reverse the tide on climate change. To solve this issue, we need systemic reform, led by a genuine desire running from central government downwards to revolutionise our transport infrastructure. This means putting walking, cycling and running as top priorities going forward.

As an example of what this can achieve, look at Copenhagen. To quote from an article on the World Economic Forum website, 41% of commutes (to work or study) are done on a bike thanks to the construction of cycling superhighways across the city. Alongside the health benefits this has brought, figures from the finance minister suggest that every time someone replaces a 1km car journey with an equivalent bike ride, the city experiences an economic gain of 10.09 krone, or around  £1.19. The reasons for this include shorter commute times, a reduction in sick leave, and increased retail spending. There’s nothing to suggest that, with greener transport infrastructure much higher up on the agenda, we couldn’t achieve the same results here in the U.K.

Working together for a better planet

If you are helping to save our planet, then we’d love to help you. At a Better Planet, we have a team with expertise in all areas of marketing ready to find the best way of communicating your message to your audience. If this interests you, don’t hesitate to contact us.

Vegetarian looking into reducing dairy intake.
Recently invested in a good bike and uses it to get around instead of cars, whenever possible.
Makes clothes last a LONG time - has owned his favourite shirt for seven years (don’t worry, it’s been washed in that time).