HS2: The Whitest of White Elephants? 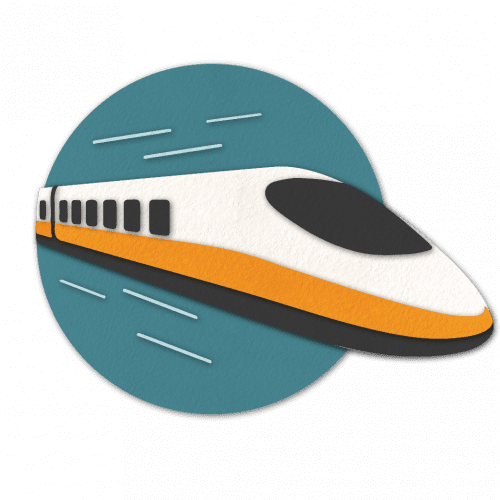 It’s fair to say that HS2 stirs up the emotions, with plenty of passionate, pleasingly well mannered and respectful debate occurring whenever we share or comment about the topic on our social media channels.  The thing is, we normally actively encourage the promotion of sustainable, public transportation, anything to ween us all off our addiction to the car.  So we should be advocates of HS2 right?  Well, we have significant concerns over the environmental impact of building the railway line, but maybe even this is missing a fundamental question:  Will Hs2 be outdated even before it’s completed?  In our latest blog, we investigate this further by looking at two (relatively more) cost-effective and significantly quicker alternatives: MagLev and Hyperloop.

High Speed 2 (HS2) has been billed by its proponents as an infrastructure project that will address a number of concerns, ranging from the bias of London over the rest of the country, an associated re-balancing of the national economy and, with an apparent lack of irony, essential if the UK is to become a carbon-neutral nation.  Further, the requirement for dedicated lines is required as this will free up capacity on the existing lines, whilst also allowing what would become the quickest trains in Europe to run at their top speeds, widely reported as being in excess of 250mph.   Phase one connects London to Birmingham, with other phases continuing to Manchester and Leeds respectively.   In the interests of balance, you can read more about HS2 here.

So, besides the escalating costs (north of £106bn) the detractors of HS2 focus on two main areas of concern: the environment and (even more ironically) connectivity.   First, the environment.  As the Hs2 Action Alliance reports:

“HS2 will have a devastating impact on precious wildlife and biodiversity… HS2 will pass through or adversely impact over 130 protected wildlife sites, including 10 Sites of Special Scientific Interest, an Area of Outstanding Natural Beauty and over 50 ancient woodlands, many over 400 years old.”

Secondly, connectivity.   Brand new railway lines require the infrastructure to support it, including typically futuristic stations such as that proposed at Birmingham Curzon Street.  However, the new railway lines and stations will not connect to the existing network, nor will they be placed in a central location, meaning anyone wishing to benefit from the service is likely to have to travel further to do so.   Hs1, the high speed line that connects the UK to Europe via the Channel Tunnel, is also not connected, so anyone travelling from the North to the Continent will still be required to transfer and commute across London to the existing St Pancreas International.  As an exercise in lack of joined-up-thinking goes, Hs2 is a superb example.

And that’s before we address the two alternatives!  Should these be the proverbial nail in the coffin of Hs2?

As soon as you mention “levitation” it conjures up images of Sci-Fi, or even an outer-body experience.  Here though, it’s comparatively mundane with MagLev standing for Magnetic Levitation.  Specifically, the trustworthy Collins Dictionary defines this as:

“a type of high-speed train that runs on magnets supported by a magnetic field generated around the track.”

Whilst this may sound futuristic, the reality is that MagLev already exists and has done so for a number of years.  As long ago as the early 1980s, there was a small, slow speed MagLev at Birmingham Airport but it was not until 2002 when the first full speed line became operational.

The 19 mile Shanghai Maglev Train (SMT) connects the mega-city’s International Airport to its centre. Perhaps more pertinently, it reaches speeds in excess of 268mph, some 40mph quicker than the maximum operational speeds planned for HS2.  Meanwhile, the Tokyo to Osaka Maglev will reach staggering speeds of over 310mph when it becomes operational by the mid 2030s.

Whilst the energy efficiency savings of MagLev compared to conventional trains can be up to 30%, the longer term operational and maintenance benefits can be huge.

The biggest drawbacks to MagLev though are its initial cost and here in the UK, the same potential issues that cause alarm to HS2’s critics, chiefly that all MagLev tracks will have to be built from scratch, as would the stations and its other fundamental infrastructure.

We live in an age of technological enlightenment and as such, the initial ideas of Mr PayPal and nowadays Mr Tesla Elon Musk in his 2013 White Paper are already at the stages of advanced testing.  We would recommend anyone interested in understanding Hyperloop to watch this superb video by The B1M though essentially, it is MagLev in a tube. By removing any external sources of friction, the proposed speeds of 760mph more than justify its nametag.

To give Musk some credit, he encouraged competition by “open sourcing” the technology behind his concept, meaning anyone could access this.  This approach has effectively led to an on-going hyperloop-race, principally between Virgin Hyperloop and Tusk’s SpaceX.

As with any brand new technology, the cost of Hyperloop is currently unviable commercially speaking, with Musk’s   initial LA-San Francisco route costing up to $100bn. However, as we mention above, HS2 is not exactly cost-effective either.   HS2 is not earmarked to become operational until at least the mid 2030s, by which time the initial costs of Hyperloop-and indeed MagLev-will be significantly more affordable.

Hyperloop will still have an impact on the environment as again, the infrastructure will need to be built quite literally from the ground up.  It also remains to be seen how receptive people will be hurtling to/from cities in a tube, whilst we can only imagine the uproar of opposition if these tubes are built on our green and pleasant land.

After reading up on this subject (thanks Google) and considering the various pros and cons, we can’t help asking ourselves the question: do we actually need any of this?

It is true that the UK suffers from an outdated, creaking railway network that essentially still runs on the same routes our Victorian forefathers built in the 1800s, propelling first the UK and then the wider world into the Industrial Revolution. In the intervening time, our European cousins have caught us up and left us far, far behind by tapping into and delivering on the potential rail has for the movement of both passengers and freight.  How we envy continental services which are regular, fast and punctual.

The assertion that “something must be done” and the pursuit of modern alternatives therefore seems quite logical.  Until at least we ask a couple of fundamental questions: Do we really need 250mph+ trains in a relatively small nation and – post Covid-19 – will there be such a requirement to commute between cities in such numbers?  Is it right to be pursuing a more conventional rail technology when other nations are likely to have adopted something more advanced by the time the UK’s first Hs2 trains run?  And finally, couldn’t we achieve a better and more appealing train system simply by electrifying the existing network, delivering better rolling stock, more frequent services and (dare we say it) cheaper fares?

After all, unless any new and existing services are affordable to the everyday commuter, aren’t we just in danger of pricing people out of a mode of transport which is intended to be more appealing than car travel?  Annual price increases have become a running joke.

Within this context, we reach the conclusion that HS2 isn’t for us.  But what do you think?

As we mentioned at the start, we welcome well mannered, informed and passionate debate on this or other areas we are passionate about as we all strive to become A Better Planet.    Please follow us across our social media channels – Twitter, Instagram, Facebook and LinkedIn.

Posted in Our News, Things We Care About
BACK